GAA football is known for its high level of physical body contact. These high impact collisions can occur from any direction. Players typically wear no protective padding of any kind except for a mouth guard. As such, impact injury rates tend to be high.

Soft tissue injuries are the most frequent, including injuries to the hamstring, quadriceps and calf muscles. 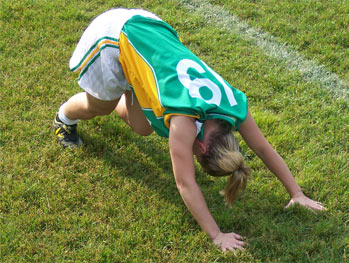 Full contact play with the potential to be tackled or bumped from any angle means that the risk of a knee being twisted or caught on a dangerous angle is high. Injuries to the knee, ankle and shoulder joints are common.

Hamstring strain is a common player injury. Knee reconstructions (especially from ACL injury) are among the season or career threatening injuries.

Hamstring strain is still the number one injury in the game in terms of both incidence and prevalence (missed games).

It has been found that hamstring and groin injury incidence and prevalence were both significant as are calf, knee tendon and other leg/foot/ankle injury. Excellent research from the AFL in Australia noted that the recurrence rate for hamstring injuries remains high although it is improving compared to stats reviewed from the 90s. There is no reason why these stats could not related to GAA football as there are strong similarities between the two sports.

There has also been an increase in incidence of concussion even though the incidence was still low. Concussion has been a major injury concern for all sports in recent years with further understanding that there is a possible link between concussions suffered in sport and neurodegenerative conditions in later life. Reflecting these concerns we at Premier Physiotherapy reinforce a more conservative approach to concussion management.

After a comprehensive assessment, your physiotherapist will create a bespoke treatment plan to best treat your condition

We have a team of expert Physiotherapist, specialising in a range of treatments. Arrange a consultation today!

We are Approved by all major insurance companies. Check your policy for more details.
We use cookies to ensure that we give you the best experience on our website. If you continue to use this site we will assume that you are happy with it.Ok